Posted on 06/11/2020 by Steffie Ypma
in: Categories: All posts and Legal frameworks. 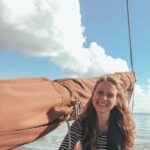 As the days get shorter and the leaves begin to fall, I can’t help but longingly think about the beach while staring into my morning cup of tea. Sometimes when I take my first sip, I close my eyes and think about the blue skies and the cries of seagulls and the sound of the waves. On some days this image is so strong I can almost hear the sound of the waves, and feel the sand under my feet, and those little bits of plastic string wrapping around my toes…. Wait what?

Unfortunately, virtually all of the world’s beaches suffer from plastic pollution, and the Galápagos Islands are no exemption. Beach cleanups have shown that the biggest source of pollution on the Galápagos Islands are pieces of netting as well as plastic bottle caps. As not all plastic that washes ashore has the same origin, it is important to look at the problem of plastic pollution from multiple angles. If we simply could tell people to stop polluting the oceans, the problem of plastic pollution could be solved easily. The reasoning behind this is simple: the less plastic reaches the ocean, the less plastic we need to clean up, the cleaner our beaches will be.

One way of telling people what to do, and thus regulating their behaviour, is by making laws (or conventions on an international scale). This is why we made a little detour from our usual work on plastic pathways and opened a box full of laws, conventions and complicated definitions. How is plastic pollution regulated, nationally and internationally? We believe that we need to address the problem from different angles to truly understand its nature, and to find solutions for the future.

There are many international laws in place to regulate and prevent pollution of the marine environment. One of them is MARPOL (official fancy name: International Convention for the Prevention of Pollution from Ships). This convention prohibits pollution from ships (for example by oil) and also gives rules on what to do when pollution does happen. However, MARPOL and other international legal agreements were made before the problem of plastic pollution really became apparent to the international community. Therefore, it is sometimes pretty difficult, if not impossible, to find articles that forbid plastic pollution through, for example, fishing. It is also very difficult to fit the problem of pollution under existing definitions, simply because these international agreements were drafted with other forms of pollution in mind. Therefore, we see gaps with regards to the definitions under international law.

Another problem comes with the enforcement of the provisions that do exist. When looking at international law, you need to keep in mind that there is no international president (or dictator for those who are more into that) who makes laws and tells states what to do. What is more, the Seas are so large that nobody really feels responsible for them. With the Seas, it’s kind of like the dishes in communal housing. It’s really easy to put them in the sink and forget about them, and since no one feels responsible, the dishes (or the marine pollution) keeps on accumulating. To prevent this (marine pollution, not the dishes), States have to meet at conferences and discuss what they would like to regulate, and which punishments they want for those who trespass the rules. Because all States are equal, this also means that provisions can be quite general to accommodate different interests. States are unlikely to make a rule saying that no fisherman can throw plastic into the oceans ever, because some of them really need fishing for their economy. Additionally, even if they would make such a rule, there would be no international police going around and arresting those fishermen who do (remember that there was no international president? There is also no international sea police). Therefore, States themselves have to enforce the rules that are already there.

States cannot put each other in jail (although this is kind of a fun thought). Instead, they can ask each other (friendly) to comply with international law. We can compare this to me asking you to pass me the sugar for my tea over breakfast. If you don’t pass me the sugar, I will be mad at you (and I might not pass you the butter when you ask for it). Similarly, if a State doesn’t comply with a diplomatic request, the State who made that request might follow with other diplomatic consequences later. However, whether this works depends on the circumstances of the case.  An example is illegal fishing of the coast of the Galápagos [1].  Ecuador is unable to police the several large foreign fishing boats that are outside of the Galápagos reserve, as they cannot control the area outside of their jurisdiction (jurisdiction is a fancy word for an area that you can legally control). Therefore, they have to make diplomatic requests [2] to China to do the policing. In some cases, China has agreed to police more, or even cooperate with Ecuador, but it is unsure whether this is enough. This shows that small countries can be very weak compared to bigger countries when it comes to regulating wrongdoers. That doesn’t sound too nice, does it?

Before this story turns out to be as gloomy as the current autumn weather, let me pass you the virtual sugar for your tea, and let me tell you about hope. While there might be many gaps in the current international legal framework, these also provide room for change. As Leonard Cohen once said: “There is a crack, a crack in everything – That’s how the light gets in”. States are currently coming together to think about ways to regulate plastics and fishing, and several international organisations are trying to make laws relating to fishing nets and their usage on the oceans. This is also something that we hope to contribute to with our data. If anything, our research already shows that we need to work together with scientists, lawyers and practitioners from different disciplines to counter the problem of plastic pollution on the Galápagos. So, let’s finish that tea, and get to work.

If you’ve read this and find it interesting or you have any questions, don’t hesitate to contact us!